On 3 August 2019, two recreational craft collided in the Archipelago Sea, as a result of which two of the six persons on the smaller craft died, one sustained an injury requiring further treatment, two sustained minor injuries, and one sustained no physical injury. There were two persons on the larger craft. Neither sustained any physical injuries. The larger craft was a 15-meter motorboat, while the smaller craft was an 8-meter yacht that was running on engine power at the time of the accident. The masters of both boats had a long experience in boating. 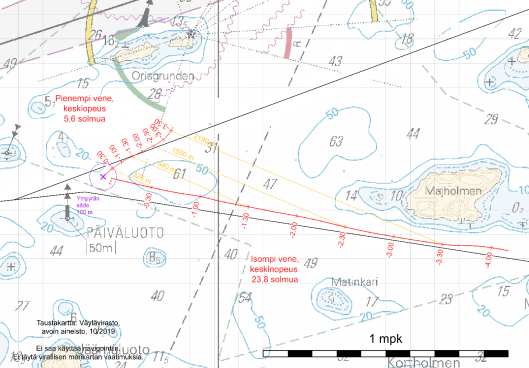 Figure: Examination of the relation between the courses of the two craft, created with the help of VTS radar and map information. The bearing between the two craft remained unchanged during the approach. A collision hazard is considered to exist unless the compass bearing to the vessel being approached changes significantly. The unit used in the figure is one M, nautical mile = 1,852 m.

Traffic in the area was light and the conditions were good, so the boaters did not feel any particular need to keep a more alert lookout. The visibility was good, but from afar, both boats blended with the background due to their colorization. Due to the constant bearing, the two craft appeared to stay more or less on a place in each other’s view, making it difficult to detect an object that does not appear to move. Such an object does not easily catch one’s attention when it is far away and looks small. The object can also remain hidden for long times in blind spots caused by vessel structures, for example. Even if the object were to be detected, assessing its course and speed could be difficult without technical means. In order to detect and assess a possible collision hazard, active measures must be taken well in advance. The situation must be monitored, and the changes in the bearing and range between the vessels must be observed.

The maritime regulations, instructions and safety culture emphasize the importance of keeping a lookout and identifying a possible collision hazard. A constant bearing and a decreasing range form a hazardous situation which increases the possibility of making an observational mistake. Experienced boaters have been involved with several maritime accidents in similar situations without particular carelessness or incaution. The phenomenon is also identified as a risk factor in other traffic modes.

When the accident occurred, five other maritime search and rescue operations were ongoing in the Archipelago Sea. The rescue resources were sufficient for carrying out all of the operations. However, it was detected during the investigation that there were deficiencies in the information flow from the Emergency Rescue Centre to the Maritime Rescue Coordination Centre.

Based on the investigation, the Safety Investigation Authority recommends that

• the Finnish Transport and Communications Agency, together with boating organizations, bring up the problem of a constant bearing and decreasing range and practical means for estimating the risk of collision as part of the training and guidance provided to boaters.

• the Finnish Transport and Communications Agency pay attention to teaching and training methods concerning proper lookout and the related practical means when auditing the training programs for recreational boating.

• the Ministry of the Interior ensure that the transfer of a maritime search and rescue mission received by an Emergency Response Centre to a Maritime Rescue Coordination Centre takes place without delay or interruption.