In the evening of the 28th of December, the Palva ferry boat was en route from Palva towards Teersalo. At the half-way point, the ferry boat pilot noticed that the vessel had drifted to the left from its route. Due to thick fog, the visibility was extremely poor, below 50 metres at an estimate. The pilot was unable to determine the precise location of the ferry boat and, despite several attempts, he was unable to correct the ferry boat’s heading back to the route, so he reduced the ferry boat’s speed.

The pilot attempted to determine the precise location of the ferry boat, but was unsuccessful in the thick fog, because he could not make any observations of any fixed points making navigation easier. Suddenly the pilot noticed something ahead, and soon the ferry boat ran to shallows at a slow speed. The ferry boat had been grounded near a small skerry to the east of the Rännit island. 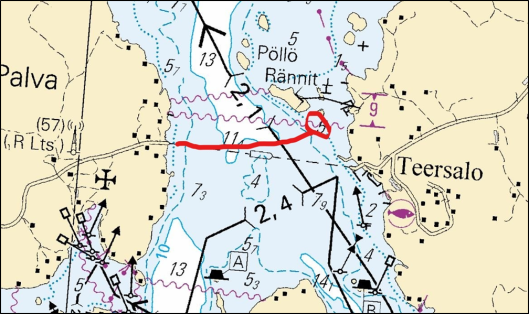 Figure: The estimated route of the ferry boat and the location of its ground to the east of the Rännit island in Teersalo. (Image: Safety Investigation Authority, base map: Base map grid ©National Land Survey of Finland 12/2018)

The ferry boat between Palva and Teersalo normally runs attached to a guide cable. At the time of the accident, the guide cable had been temporarily removed due to repair work on the ground supports of the ferry boat wharfs. For this reason, there was no guide cable to show the driver the location of the ferry route or the direction into which he should steer.

The ferry boat pilot notified the two passengers on board of the grounding and inspected the engine room to determine whether there were any leaks. After noticing that a small amount of water was leaking into the engine room, he notified the safety manager of this. He then handed over life jackets to the passengers, prepared the bilge pump and loosened the fastenings of the cutter for a possible evacuation.

The emergency rescue units alerted to the location evacuated the passengers on board the ferry boat and prepared to fight a possible fuel leak. The next morning, divers inspected the damage to the ferry boat’s underwater parts, finding it to be rather minor. Based on the inspection, an inspector of the Finnish Transport and Communications Agency gave permission to unground the ferry boat. No personal or environmental damage was caused by the accident.

The navigation equipment of the Palva ferry boat comprised a map plotter, compass, speed log, clock and radar, but the pilot only attempted to use the map plotter for navigation. Around one month previously, a fault had occurred in the ferry boat’s map plotter that made it more difficult to determine the ferry boat’s heading. The shipping company was not aware of the fault, so no corrective measures had been taken.

It was found during the investigation that according to the shipping company’s instructions, the radar had to be kept at least on standby during running, and that its use must be increased in limited visibility. In this case, however, the radar was not used as a navigation aid. This was partially due to the pilot not being familiar with radar-assisted navigation.

It was also found during the investigation that the navigation skills and experience of ferry boat pilots vary. There is no time during the training period of new pilots for a thorough review of all things that are important for safety. As a rule, the navigation training and familiarisation of ferry boat pilots are the responsibility of the operator, covered by self-monitoring.

The Safety Investigation Authority recommends that:

• The Ministry of Transport and Communications prepare an amendment, defining ferry boats as vessels.

• The Finnish Transport and Communications Agency define the navigation qualification requirements for ferry boat pilots and the minimum manning of ferry boats.

• The service customer includes the navigation qualification requirements for ferry boat pilots and the manning requirements of the ferry boats in its service description.