In the early hours of the morning of Saturday, 1 December 2018, the missile boat Hanko of the Finnish Navy was running on the west side of Emäsalo southwards on the Sköldvik fairway. The steering crew used visual navigation, supported by the integrated navigation system. The visibility was good. The missile boat was not sending AIS data. Earlier, the missile boat had reported its future area of operations to the VTS Centre.

The pilot boat L239 set out from the Emäsalo pilot station to pick up a pilot from the Port of Sköldvik. L239 setting out was detected on the bridge of the missile boat Hanko immediately after it departed the pilot station. The crew of Hanko was aware that their vessel was on the left side of the centre line of the fairway. 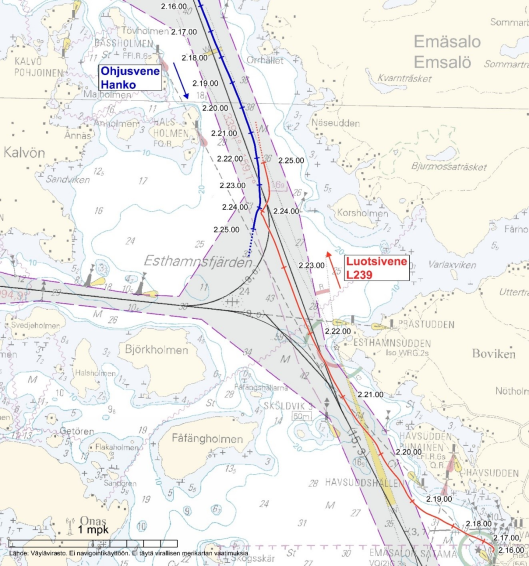 Kuva 1. The routes of the missile boat Hanko and the pilot boat L239 from 02.16 onwards. (Base map: Finnish Transport and Infrastructure Agency, drawing: SIA)

In order to avoid similar accidents and reduce their consequences, the Safety Investigation Authority recommends that

- The Navy perform a risk assessment of the significance of the undetectability of its operations to the safety of its own and other vessels and to the possibilities of the VTS to monitor the general safety of the maritime traffic in its area and to prepare instructions for the measures necessary for the management of the identified risks.

- The Navy and Finnpilot Pilotage Oy agree with the Finnish Transport and Communications Agency on procedures for reporting incidents for the overall development of maritime safety.