Safety Investigation Authority, Finland, has conducted a preliminary investigation of an accident in which parts of a ventilation duct, weighing a total of 217 kg, fell onto the concert audience in Vaasa Arena on 17 December 2017. Approximately 20 people were injured in the accident. The lives of the victims were in danger, particularly from the pieces of the duct falling edge first.

Starting from the date of the accident, we have received information from the police, rescue services, City of Vaasa building control, representative of the company managing the arena and the company that installed the ventilation.

The arena was originally built in the early 1970s. It was renovated and expanded at the end of the 1990s. At that time, ventilation ducts of various sizes and orientations were installed onto the ceiling. The ducts were suspended from the ceiling with bands extending all the way around the duct. Some of the suspension points were located on the laminated-timber primary beams, while in other places, the ducts were suspended from secondary beams with the help of threaded rods. The plywood-girded timber secondary beams were concealed at a depth of approximately 17 cm under the additional insulation.

The screen suspended from the centre of the arena was modified in 2014, and the modifications required shortening one exhaust air duct with a diameter of 800 mm by several metres. The duct consisted of three-metre pipes, some of which were removed. The same T-piece used in the original installation was then attached back onto the end of the duct. Thus, the location of the T-piece changed and it had to be reattached onto the ceiling of the arena.

This was a minor installation that does not require a building permit. Accordingly, the building control authorities did not inspect the installation. A company specialising in HVAC installation was commissioned by the arena management company for the shortening and attachment work. Due to the "simplicity" of the job, the suspensions of the pipes are typically not, nor were they in this case, designed by an engineer. The work relied on the expertise of the technicians and their supervisors.

After the accident, it was determined that the T-piece of the shortened pipe had been poorly suspended. One of the supports gave way at least a few days before the accident, which is evident from photographs taken of the ice hockey game played two days before the accident. Observations were also made at the start of the concert. After the accident, several people gave similar testimonies of hearing noises from the ceiling as the concert was beginning, and some people had noticed that a T-piece was askew. No-one had notified the arena staff of their observations. According to their testimony, the arena staff had not noticed anything unusual about the pipes before the fall.

The failing of one support increased the load on the others, which caused them to give way in different manners. One threaded rod broke due to bending, and the self-tapping screws of the band, only extending part of the way around the pipe, came loose at another point. The diameters of the threaded rods were 8 mm and 10 mm.

The mounting of the T-piece was weak, because the threaded rods were only installed on one side of the pipe and had been installed diagonally. A particular problem with the threaded rod that came loose first was that the screw at its top had not connected with the timber secondary beam properly. The wood had split and the screw was torn loose. The installation work was hindered by the fact that the beams were hidden within the insulation. The screw at the end of the threaded rod was screwed in without seeing the point at which it connected with the beam.

The original T-piece had probably been mounted during the insulation work, making it easier to achieve a secure attachment to the beam. In addition, bands that extended all the way around the pipe and two threaded rods per band had been used in the original installation.

According to the preliminary investigation, similar accidents can be avoided in the future if:

2. Regardless of official supervision or the building permit, the suspension of heavy elements must be designed and implemented in a manner that ensures the safety of building use and the sufficient strength and stability of the structures throughout their intended lifespan. From the perspective of human safety, heavy suspended elements are equivalent to load-bearing structures.

3. Suspended elements that could cause a hazard must be installed in a manner that ensures proper attachment and the transmission of forces to the load-bearing structure. Alternatively, the reliability of the installation can be improved with additional mountings or independent safeguards.

4. A structural engineer shall be employed if finding secure mounting points is difficult or there is uncertainty about the mounting method.

This accident will not cause further action by the Safety Investigation Authority, Finland. The arena management company has inspected the remaining suspensions in the Vaasa Arena and added cable safeguards where necessary. 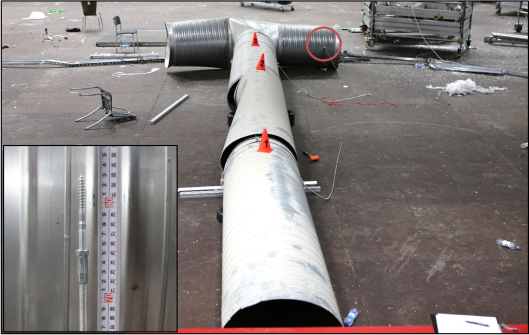 Figure 1. The fallen pieces of the ventilation duct, placed in the original shape of the duct. The duct broke into three pieces as it fell. The screw at the end of the threaded rod that was first torn away from the roof beam is circled. The smaller image features a close-up of the same screw. (Photo: Police.) 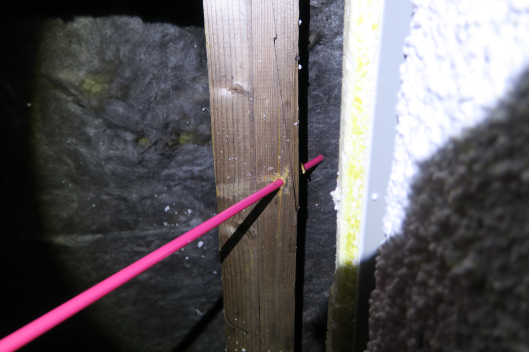 Figure 2. The screw that came off first had been insufficiently secured to the roof beam. Installed inside the insulation with no visibility of the installation surface, the screw had connected the edge of the timber obliquely and split the timber. In the image, a thin rod is inserted into the hole to demonstrate the orientation of the screw hole. (Photo: Police.) 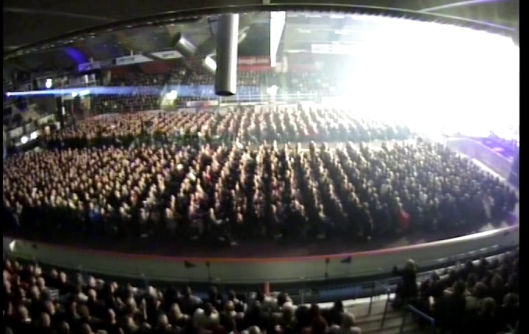 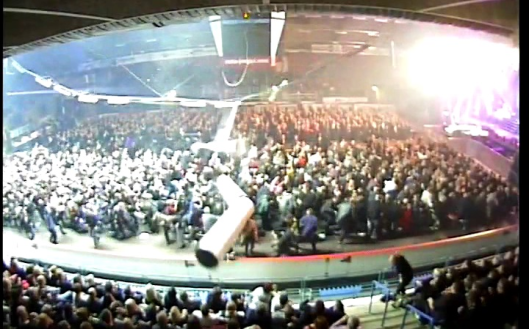 Figure 4. Screen capture from surveillance camera footage at the moment the three pieces of the duct struck the audience